The Different styles of Bharatnatyam 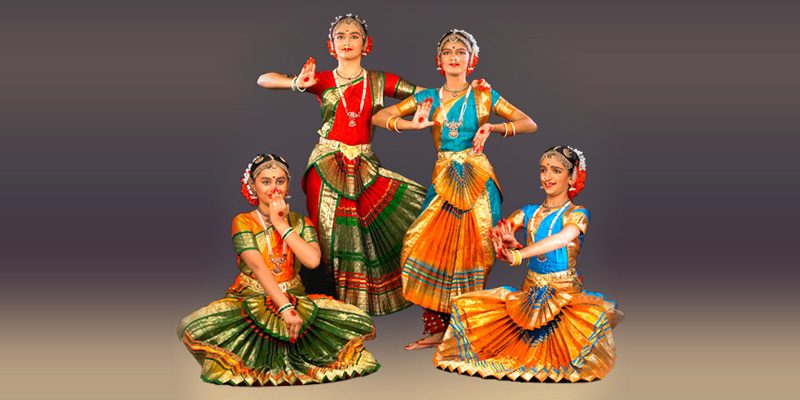 Bharatham is originated in Tanjore, Tamil Nadu, it voyages across the country as an art form and hence combine with different places and personalities, bestow it in different styles. The Bharatnatyam style depend on the person who is teaching it, since every guru has their own style of sharing their knowledge of an art form. However, there are different Bharatanatyam styles that are commonly known and practiced. The Melathoor style draws from the devadasi tradition and Melathur Bhagavad Mela. The Kalakshetra style is more like a simplified version of the Pandanalloor style, it has sharp and controlled body movements. The Kalakshetra or Pandanallur style has its roots in the Pandanalloor village of Tamil Nadu. The Vazhavoor style is rich in Sringara and makes use of natural expressions.

Pandanallur style of Bharatanatyam derives its name from Pandanallur a village of Thanjavur district in Tamil Nadu, India. Dance Guru Meenakshisundaram Pillai (1869–1964) lived in the village. Meenakshisundaram Pillai, whose ancestors were nattuvanars and were a descendant of the Thanjavur Quartet, which involve of four brothers: Chinnaiah, Ponniah, Sivanandam and Vadivel. They were melodist in the early 19th century in Thanjavur to form the main classical masterpieces of Bharatanatyam. The Pandanallur style developed a opinion for the emphasis on linear geometry that can be found in the adavu technique, and for its intensity and understatement in abhinaya. Pandanallur style gives a lot of importance to abinayaha. Moreover, stamping the foot hard against the floor is discouraged in this style. Instead, slow movements are used to make the salangai (ankle bells) give a charming sound. The strong footwork required and every step is marked as a result of one of the arts and music to reveal the main feature of accuracy and regularity to bring it out. The dancer required to have a natural rhythmic body expression. This feature is not possible for every student. The sitting postures, intense jumps and swift movements are the main character of this style.

Vazhuvoor Bagyathammal Ramaiah Pillai was born in 1910. He learned the arts of Nattuvangam and Bharatanatyam from his maternal uncle Maanikka Nattuvanar. The style speculates the temple statue postures. Highlights of this style are body bending forward movements in are relatively slow. He learned traditional and most ancient vazhuvoor style from his ancestors and from the days of the Cholas dynasty. They popularized this style around the world. Rukmani Devi Arundale institutionalized Bharatanatyam and afterwards Vazhuvooraar style became popular. It was implemented by Rama Natak Kiruti, Tyagaraya Swami Kiruti, Bharathiyar, Kutralak Kuravanji, Arunachala Kavi, and Oottukkadu Venkata Kavi songs in Baratanatyam. The style was used by Dr. Padma Subrahmanyam in an extraordinary abhinaya performer.

Kalakshetra Foundation, formerly simply Kalakshetra which based in Chennai. It is an arts and cultural academy dedicated to the preservation of traditional values of Indian arts and crafts, especially in the field of Bharatanatyam dance and Gandharvaveda music. The academy was founded in January 1936 by Rukmini Devi Arundale and her husband George Arundale. under Arundale’s guidance the institution achieved national and international recognition for its unique style and perfectionism. In 1962 Kalakshetra moved to a new campus in Besant Nagar Chennai. Removing objectionable elements(mostly the Sringara certain emotional elements evocative of the erotic, such as hip, neck, lip and chest movements from the Pandanallur style was publicly criticized by Indian dancer Tanjore Balasaraswati (1918–1984) and other representatives of Tamil Nadu’s traditional Isai Velalar culture was a modern style of Bharatanatyam. This was disentangle in Pandanallur style. Rukmini Devi Arundale started Kalakshetra school of dance and w brought grace and respect to the Bharatanatyam dance. This exhilarated the Bharatanatyam as a performance in temples to modern dance form. She emphasized that not just in linear swift movements but also colourful costumes and proper stage settings should be included. With this style Bharatanatyam also became contemporary around the globe.

The Melattur style of Bharatanatyam dance was developed largely out of the devadasi traditions and Melattur Bhagavata Mela by Mangudi Dorairaja Iyer (1900–1980) a sanyasi following Srividya Upasana. It is only the deities or the great rishis who were deemed worthy of such aggrandizement, the repertoire of a Melattur style dancer consists mostly of the ancient items performed in the temples. The dancer is expected to use the salangai (ankle bells) in a more knowledgeable that produces a richer variety of sounds and highlights the rhythm. Another distinctive feature is the presence of pancha nadais and extensive use of gati bhedas. For instance in varnam there would be gati bhedam in every jati. There is a special emphasis on crisp adavus, fluid variations or patterned korvais. Due to the Melattur Bhagavata Mela influence, the style makes extensive use of the dramatic elements, i.e. characterisation, which requires highly expressive and intricate abhinaya. Unlike other Bharatham styles, the facial expressions in of the Melattur style dancer are not rigidly defined, are neither theatrical nor understated, which requires a high degree of analysis and individual extemporization. Because of the devadasi influence there is an emphasis on sringara rasa, rather than on a neutral bhakti. The nritta abhinaya is different from most other styles in the sense that each body movement is to be reflected in a different facial expression in a spontaneous manner. Developed from the devadasi style, Melattur Bhagavata Mela by Mangudi Dorairaja Iyer this style nourished. Shringara and Bhakthi Rasa are the main elements of this style.

Kalamandalam V. Satyabhama (4 November 1937 – 13 September 2015) was an Indian classical dancer, teacher and choreographer, known for her performances and scholarship in mohiniyattam. She is regarded as a matriarch of the classical dance form. She was also well versed in other classical dances of Kerala. She was awarded the Padma Shri, in 2014, for her contributions to the art and culture by the Government of India. Kalamandalam Satybhama was the first woman Vice Principal of Kerala Kalamandalam and, later, became its principal till she retired in 1992. She sat on the selection committee to decide annual Kalamandalam fellowships She was also functioning as the Dean of Kerala Kalamandalam. Satyabhama is credited with purifying the dance form by weeding out external influences. She modified the performance techniques so that the emotive aspect of the performance strictly sticks to Lasyam. She is also said to have transfigure the mohiniyattam curriculum at Kerala Kalamandalam which is said to have resulted in the evolution of Kalamandalam style mohiniyattam. She also tried to add more spice into the presentation of the dance form by evoking drama through emphasize body kinetics through mudras, poses and steps, which at times, also analysis the another major contribution of Satyabhama is the changes she brought to the mohiniyattam costumes. The designs she has created follows Kerala traditions in color, pattern and accessories and have become the signature of Kalamandalam style. She also changed the way the dancer styles the hair, which was vaguely adapted from Raja Ravi Varmas paintings. Kerala center for learning Indian classical forms deemed to be a University of Art and Culture by the Government of India. With the influence of Mohiniyattam and Kathakali, students who learnt Bharatanatyam here developed a unique style which now recognized as Kalamandalam Style of Bharatanatyam.